Fat bastardo and his gang

The new REGGAETON, BAILE FUNK, HIP HOP, DANCEHALL and MOOMBAHTON Party with a breathtaking Animation! A “Stranomondo” Party, the Agency creator of “Circo Nero” that gives a touch of absolute originality – in the sound and on the show – to this kind of party that is becoming so popular in Clubs all over the World. Legend tells that during the 2009 Autumn in Washington the House DJ/Producer Dave Nada, organized a “Skipping Party”, the famous parties in the Basement when you “play hooky”. Having to perform after a DJ who was playing Reggaeton and Bachata he tried to slow down his Tropical and Dutch House tracks. He slowed to 108 bpm “Moombah” by Silvio Ecomo & DJ Chuckie remixed by Afrojack and did the same with “Riverside” by Sidney Samson. People went out of their minds and the party became explosive. It was the birth of a new genre, the birth of MOOMBAHTON!

FAT BASTARDO pays tribute to these music genres that are rooted also in the style and philosophy of 70’s, when incredible characters, a little bit Dandy and a little bit Gangster, who were immediately labeled as “PIMPS” and that in Districts like Hunters Point in San Francisco – as the radical writer Eldridge Cleaver member of the Black Panthers wrote – they were the Kings of those streets. “Bogus aristocrats dedicated to luxury, ladies’ man, fops wearing 150$ suits in the Sly Stone style, the black Lester Chambers style hat with 4 inches rim, thin nylon stockings with vertical stripes driving Eldorado convertible.

The Pimp was THE ARISTOCRAT OF CHEATERS”.
“FAT BASTARDO & HIS GANG” with this Party pays tribute to their Style and their Music! 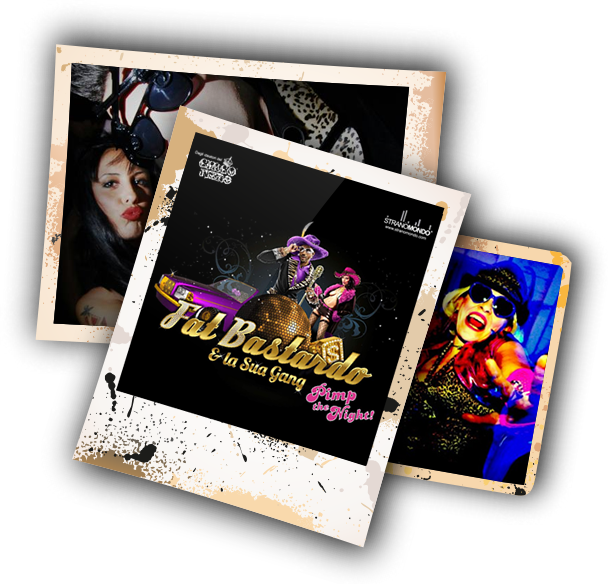