And us, we're crazy for fun…

“and us, we're crazy for fun
we who stole the fire to the wheel of the Sun,
we give to you humans the secret of every art.

And fires we will become,
chained from a spark, to set the Night on fire” 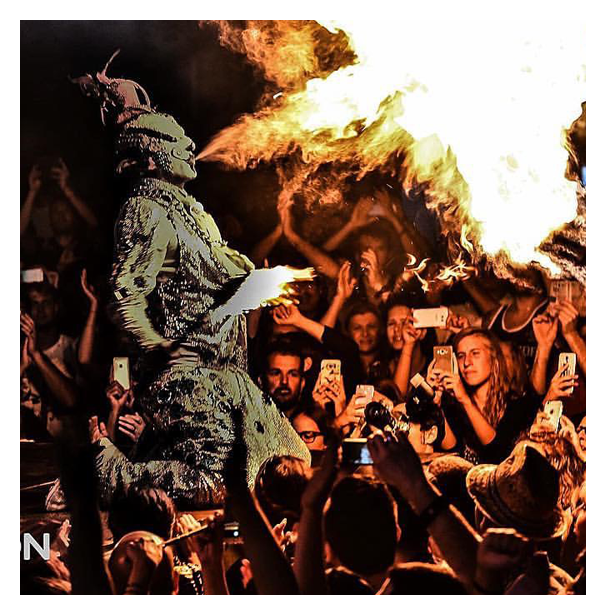 A real brigade, costumes, makeup and extraordinary performers from an independent show, that was born to the first mythical BEACH PARTY of the Circo Nero in 2011 in front of 30.000 people and that it has been since then integral part of every date of the Circo Nero. However, it shines in its own light... and what a light!

...and many others in Italy and abroad.

Here you have some of the disciplines that “LA BRIGADA DE FUEGO ” by Circo Nero performs during its shows:

BELLY DANCE A scenography inspired to the rites of the ancient Egypt's fires and of the Arabic World, a mix of sensuality' and elegance that only belly dancers know how to transmit with their ancient art.

“KATANA” SWORD FIGHTS Recalled from the ancient East, where the sword "katana", grasped by the Samurai, was the very first way to defend the King. The sword was burned during a dance: it was a propitiatory message to drive away the evil souls.

BOOGENG Dancing Tools of Chinese origin, which are tied to the Tai Chi with their slow and precise gestures. They create sensuality and imagination, and were used as a declaration of love.

BINS ON FIRE The mythology and the history teach us that the ancient populations communicated among them with sounds and signals. They were signals of war, of initiation, of sacredness. So the "BRIGADA" wants to give a sacredness to the beginning of the show.

FIRE FANS They were used to dance in front of the Royals in Imperial China because they wished good fortune against evil.

BOLAS Originally they were weapons and tools of hunting used in China, by the Indians of South America and by Eskimos. Once burned, they draw spectacular choreographies that reproduced the ancient hunters' gestures.

THE DEMON AND THE FIRE Just like "The Demon" (from the Greek Daimon) of Socrates, representing a Mentor Spirit who helps in every decision to take, The Demon of the Brigada is with us in our "trips", and opens the show and the dances with its drum roll. "And fires we will become, chained from a spark, to set the Night on fire”

THE FIRE BIRD "The bird of fire" (L'Oiseau de feu), which was represented for the first time in 1910 at the Opéra in Paris, was the first great ballet of the great Russian musician Igor' Stravinskij. The plot, inspired by a Russian fairytale, is about the clash between two antithetical elements: an immortal Ogre named Kašej, who can petrify the human beings (a symbol of the evil); and a Fire Bird with the power of defeating the ogre's spells. This new character of the “Brigada de Fuego” is dedicated to this fantastic Opera.

CORDE STRINGS They stem from the Bolases and they were used by the warriors when they came back from the hunting or from the war. They were also used as thanks to the Spirits that had protected them.

FIRESPITTER This character is recalled from mythology and ancient fairytales, it's "firespitter", the one who bewitches the crowd. In India, where he's supposed to be born as a juggler, he was performed by the "Fakirs" during the local parties.

PERCUSSIONS To accompany these performances they use tribal sounds and percussions according to the different schools of music and to Italian popular traditions, but also African, Indian, Japanese and South American traditions.